Nosferatu, A Symphony of Angles, Shapes, Shades and, Not Incidentally, Horror 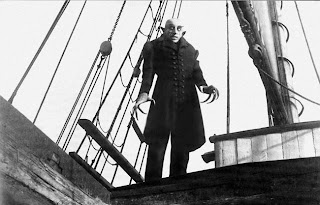 It's all angles. Shapes. Shades. A camera that holds focus one beat longer than we expect.

The director was F.W. Murnau. He was messing with people's minds.

Nosferatu is like a nightmare. Not a gross disgusting one that you want to run away from. No this is a bewitching, beguiling nightmare that despite the better angels of your nature you want to behold. More than that, you want to follow -- where will it take me? Surely this is ultimately harmless, it's only a dream (a movie). All those haunting images and that's not even including Count Orlock (Max Schreck).

Murnau was perhaps the leading practitioner of the expressionist school of film making that came out Germany in the 1920s (maybe it was Fritz Lang, I dunno). Give him the story of a vampire, indeed the vampire story, Dracula not at all thinly veiled, and well you're in for a spectacle.

The notion of the undead is frightening. A predatory killer is frightening. Innocents preyed on at night is frightening. You combine these three elements into a world that is itself a nightmare and you've got the full title of the movie -- Nosferatu, Symphony of Horror. One of the definitions for symphony is "something that in its harmonious complexity or variety suggests a symphonic composition." That's the film right there.

Imagine your worst nightmare come to life. Not the events so much as the look of it. All is abstraction and distortion. Nothing has more than two eyes, but the eyes are too long. Buildings do not float, or laugh or bleed, but they seem out of shape. There is gargoyle in everything but nothing being unreal, just distorted. Is a gargoyle so impossible a creature, or is just a little beyond what we know?

In Nosferatu so many objects seem to point to the heavens, they're so sharp. Like Orlock's incredible fingers, the masts of a ship and structures. The evil one's castle, at first view, looks like an erect phallus. Strong and angry and pointing.

Roads and alleys tilt, some seem endless like you could drown in them. All that sharpness yet the sense you could be swallowed up. Forest seemed menacing despite their beauty. Mountains are majestic, sure, but they are also foreboding. Windows are not ways to look out so much as ways to be seen, and view a nether world.

Young eyes might look at this relic of the silent era, their eyes washing out all the eccentricity of it. "That's not scary!" they'd exclaim. Obviously preferring a film that is the equivalent of someone sneaking up behind you and yelling "boo!" in your ear. Or perhaps a cinematic version of a steaming pile of feces being thrown at someone. "Yuck! Gross!" But if you let your imagination have any play within the world Murnau created, it'll scare the bejeezus out of you. And you know what else? The lack of voices just adds to the eeriness, making it all the more like a dream state.

Nosferatu is rightly famous for the curious Mr. Schreck's performance. He's meant to look like a rat, the notorious plague caring rodent part and parcel to the story and to many human fears. Herr Schreck lacks the sophistication of Bela Lugosi's Dracula. There isn't the intelligence that can make a predator all the scarier. But there is the inexorable malevolence of the creature totally without reason or the slightest chance of conscience. There is no negotiation with his Orlock, no nuance. Just like a rat he merely is.

The is he is is creepy. In a still photo he may appear silly. But when you watch him move, or worse, not move but watch, you'll shudder.

Nosferatu is a not your silly teenager vampire story of today. It's not about the teeth or bright red oozing blood. It's about creating a world that is your worst nightmare...but you can't look away.

Posted by Richard Hourula at 3:15 PM

If only my students could get past the creature's speedy mode of transportation, which they find more hilarious than terrifying... =)