Movies For Your Inner Leftist, That Are Suitable For All Political Persuasions 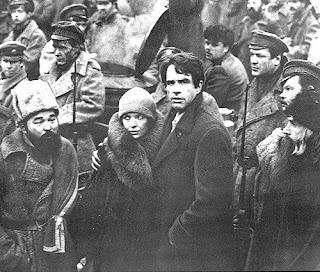 Today I offer the first of a two-part look at some great films that are not only entertaining and engaging but appeal to me for what I perceive to be their political message. All have enjoyed wide spread popularity, so I feel it safe to say that those of other political persuasions would enjoy them as well, albeit for different reasons. I suppose exceptions should be made for Nazis, the Taliban and others of ultra extreme beliefs. (Then again did you know that one of Adolph Hitler's favorite films was The Lives of a Bengal Dancer (1935) starring as-American-as-apple-pie, Gary Cooper?).

In some cases these movies were made by directors who intended to convey a liberal message. In other cases any such message was unintentional and is a product more of either one's own interpretation or the intent of a screenwriter. Frank Capra, for example, was a republican yet he made several movies that speak powerfully to the left, such as Meet John Doe (1941).

What follows is a half dozen wonderful films that appeal to all audiences, but maybe mostly to lefties.

Reds (1981). Let's see ,we we've got the story of John Reed and other characters include Big Bill Hawyood, Emma Goldman, Louise Bryant and Max Eastman (if you're unfamiliar with these people you really need to bone up on your American history). Safe to say that lefties will like it. But who did the film's director and star Warren Beatty screen it for? Then president Ronald Reagan, Mr. Government-is-the-problem his own self*. Reagan reportedly quite liked the film. Many might see it as depicting the failure of the early 20th century leftist movement in the United States and the hypocrisy of the Russian Revolution. To others its many messages, such as this one spoken by Reed: "Look, what does a capitalist do? Let me ask you that, Mike. Huh? Tell me. I mean, what does he make, besides money? I don't know what he makes. The workers do all the work, don't they? Well, what if they got organized?" and its romantic view of Reed's passionate radicalism, make it a celebration of radical chic.

Our Daily Bread (1934). Talk about subversive! This is the story of a a disparate collection of unemployed men and their families getting together during the Depression and SHARING their resources and talents to create a large and successful farm! No hierarchy to speak of, no one reaping a huge profit, its' share and share alike --socialism all the way. From director King Vidor starring Karen Morley, Tom Keene and John Qualen, it is the ultimate collectivist film.

All Quiet on the Western Front (1930). You can argue that any movie that depicts war is prima facie an anti-war film. In the case of AQWF however, it was an explicit message and one that was delivered most convincingly. Young men are encouraged to join the army and win glory for their country and themselves. They happily join up only to discover the harsh realities of life at the front. First scared witless, later virtually inured to the slaughter, they become cynical and bitter, finding comfort only in the brotherhood of their fellow soldiers. Yes brotherhood!

The Male Animal (1940). A professor faces possible dismissal because he wants to use a quote from martyred anarchist Bartolomeo Vanzetti in a lecture. Three professors at the same university have already been dismissed under suspicion of Communist leanings. The professor, played by Henry Fonda, must also concern himself with an old flame of his wife's who's in town for the "big game." The lovely Olivia de Havilland and Jack Carson, are the wife and ex football star, respectively. Yes, its a delightful comedy with many a light hearted moment, but to me it's as much an impassioned plea for academic freedom as anything else. While the entire community seems far more interested in the coming football game, the professor must weigh adhering to principles against maintaining a job.

Milk (2008). This actually might be the toughest for the right to accept. Not only does it concern a liberal politician's heroic struggles but he's openly gay. This drama is based on the political career of America's first openly homosexual politician elected to public office, Harvey Milk and it features Sean Penn's brilliant Oscar-winning portrayal. While its true that some conservatives who are especially strict about civil liberties support equality regardless of sexual orientation, gay rights has been a cause most closely associated with the left -- as has support of most repressed groups. The male kissing scenes will probably be especially icky to straight men on the right, especially those stuck in closets.

Mr. Smith Goes to Washington (1939). It's been blasted by both ends of the political spectrum, but today is mostly pooh poohed by the right. It shows the U.S. government at its very worst and its very best. Corrupt politicians abound, many in the pockets of an avaricious and unseen political machine. I see it and say: "see how susceptible our government is to the greedy? See how they can manipulate and profit illegally!" But I also see it and say; "see how one person can make a difference? Do you see that our government has within it the avenues by which one may combat those evil forces?" Mr. Smith tells the story of America quite neatly, showing the tragedy and hope that are side by side within our government.

Next time I'll look at six more films that have particular appeal to the progressive that lies within.

Particularly what you were saying about Capra!

I was actually talking to my mom about that just the other day.

Because I've always found it fascinating how both the right and the left take his films as being about them. That just shows how truly amazing Capra was, to be able to do that!

Great choices-- I only found out about Capra earlier this year, and it completely knocked me for a loop! I wonder if Robert Riskin was a progressive and helped sneak in all of the populism? It does seem like the only ones that are really leftist are the ones Riskin wrote.

As always, a very creative and enjoyable look at the movies we love.

I suspect that those commenters shocked at Capra's 'Republicanism' may not know that in those days the Republican party was very much isolationist, resisting attempts to become engaged in WWII. It was Roosevelt that campaigned, cajoled, etc., America's engagement .. of course Pearl Harbor made that all moot.

Ironically the Civil Rights movement occurred over the objections of many prominent southern Democrats. So the positions of parties themselves shift, because they are shifted by men who are leaders. Reagan himself was a Democrat and a union head. As that party shifted its leanings he switched.

Anyway, I like to let my 'inner leftist' out and have enjoyed many of these movies.

“Don't compromise yourself. You're all you've got.” - Janis Joplin.