For Veteran's Day, Some of the Best Movies of Our Lives, With Veterans Even 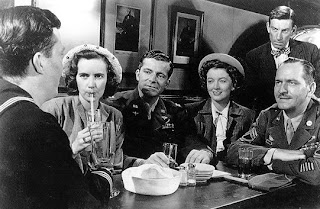 You'll see a lot of suggestions for films to watch on or around Veteran's Day and I'm here to provide still more. However, unlike other bloggers, critics or reviewers, the suggestions here are not just war pictures. Mine all feature a war veteran or two. It is, after all, veteran's who we honor on November 11 (nee Armistice Day). Brief digression: I can't be the only one who's excited about next year's Veteran's Day, specifically when the clock tolls 11:11 am. Yes, it'll be 11:11 on 11/11/11. How cool is that?

A second brief digression. It is a scandal that while the United States "honors its troops" at every possible occasion, veterans here practically have to go begging for the most basic services, especially those who are disabled as a consequence of combat.

Here are now are a few films for your Veteran's Day, all with veterans featured prominently.

The Best Years of Our Lives (1946). This is the mother of all veteran's films. The multi Oscar winner is first and last about the fates of three veterans returning to their hometown at the end of World War II. It has the immediacy of having been made at the very time it depicts. Some of the best movies about an event or time period are ones that are made contemporarily. This is a case in point. While Hollywood has churned out umpteen films about WWII, this is one of a handful to deal specifically with the lot of those fighting men upon their return home. Dana Andrews, Fredric March and Harold Russell play the trio and, along with co stars Myrna Loy and Teresa Wright, form one of the greatest ensemble casts of all time. You'll not see a better depiction of the difficulties faced by ex servicemen in adjusting to civilian life. The idea of picking up where one left off after facing the holocaust of war is laughable. Nothing is the same even when returning to a stable family. Imagine being without such a home or without one's hands. The Best Years of Our Lives is one of the better films of any kind ever made. On the topic of veterans, it's the gold standard.

Heroes For Sale (1933). Among the scars and hardships a solider can return from war with is an addiction to drugs, often painkillers that were administered to ease the suffering caused by battle injuries. Meet Tom Holmes (Richard Barthelmess) the main character in this tale. His addiction costs him his job and after rehab, sends him on the road seeking better prospects. Add to that, the medal for bravery in the line of fire he deserved has gone to another, a coward at that. Holmes overcomes hardships only to be one of the many victims of the Great Depression. A terrific film from America's most under appreciated director, William Wellman.

The Roaring Twenties (1939). Another wonderful movie that follows the exploits of an American GI returning from the Great War. This time its Eddie Bartlett played by James Cagney in one of his many outstanding performances. Talk about not honoring vets, Bartlett can't get his old job back! One thing leads to another and the next thing you know Eddie is in the bootlegging game. And before you know it he's got his own gang and is raking in the dough. Sadly, this is a rise and fall story. It's not too much of a stretch to suggest that the failure of the country to take care of its vets led the previously honest Eddie to a life of crime, a life cut short at that.

Born on the 4th of July (1989). Strictly in terms of showing the lot of veteran, this Oliver Stone film is second only to Best Years. This is the true story of Vietnam veteran Ron Kovic who entered the army a gun ho "love it or leave it" patriot and returned from the war a paraplegic as the result of a gunshot wound. It was not long after coming home that Kovic made the radical transformation into a an outspoken opponent of the war. Born on the 4th follows Kovic's life from entering the war, fighting, hospitalization and through anti war activism. Tom Cruise gave the best performance of his career to date in the starring role.

The Manchurian Candidate (1962). It's bad enough to re-adjust to society after fighting in a war but when you've unknowingly been brainwashed into being a political assassin, well that just sucks. Such is the fate of returning Korean War POW Raymond Shaw (Laurence Harvey) in this political thriller from director John Frankenheimer. Fellow POW Bennett Marco (Frank Sinatra) was not similarly programmed but he's dealing with some serious post traumatic stress disorder in the form of cryptic dreams about their experiences. Not terribly realistic (or is it?) but still a helluva film and a powerful look at PTSD.
Posted by Richard Hourula at 8:07 PM

“Don't compromise yourself. You're all you've got.” - Janis Joplin.