He Didn't Steal Scenes, He WAS Scenes, James Cagney in White Heat 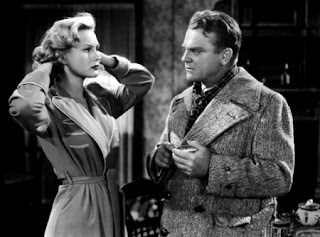 He kicks a guy down the stairs that he just shot and yells "catch!" Someone he's locked in a trunk complains about lack of air. So he shoots holes into the truck and perforce it's occupant. He's a riot! (Assuming you don't object to homicidal maniacs.)

"You wouldn't kill me in cold blood, wouldja?" He's asked.
"Not, I'll let ya warm up a little," Jarrett replies. Beautiful.

White Heat (1949) is not a movie starring James Cagney. It's a James Cagney performance with a movie surrounding it. Virginia Mayo as his cheating wife is just about perfect for the part and Margaret Wycherly as Ma couldn't be better. Edmond O'Brien is along to play an undercover cop and he's about what you'd want. The rest of the cast read their lines as guys playing cops or gangsters are supposed to do and then get the hell out of the way. This is a Cagney production all the way. Director Raoul Walsh probably realized that from the get go.

Yes, Cagney has boffo lines and action scenes aplenty and lots of chances to emote, but that's not what makes him and thus the film so wonderful. Cagney plays Jarrett as a living breathing human being with a face that conveys the life inside.

He purses his lips. Squints. Arches an eyebrow. Winks. Furrows his brow. And then there's that voice....Your typical cops and robbers in this film speak in flat, uninteresting tones. Serviceable is all. Jarrett has a voice you can hang your coat on. It's rich, expressive and like the character, compelling.

When he confronts his wayward wife after busting out of the can, Jarret gets a hold of her head (just as he's had a hold of ours the whole film) and seems to be on the verge of biting hers, speaking rapid fire with his teeth flaring. Goodness he's frightening and utterly captivating at the same time. That's a sociopath all right.

Watch Jarrett's reaction to finding out that O'Brien, who in his own words, he's "treated like a kid brother" is "a copper." How about a nice stew of anger, amazement, surprise and yes, humor. Doesn't sound like it all works together? This is Cagney doing the cooking brudder, it works!

In White Heat James Cagney demonstrates what you get when a performer combines the charisma of a star with the talent of an accomplished thespian. There are but a precious few who have ever boasted the combination. The list is short and includes people like Brando, Pacino, Bette Davis and Elizabeth Taylor. And Cagney, of course

As Cody Jarrett, Cagney didn't act. He created a person and inhabited him. Yes he played broad scenes magnificently as when he discovers that Ma is dead. But more than that he's just damn interesting to watch in the simplest of moments. And I doubt very much of it was conscious. That's the thing, it comes off so natural. Just telling the truth, as Cagney himself said of acting. It means knowing and being true to the person that is your character.

This is quite a character. The murderous head of a gang who by virtue of loving Ma so much and being subject to spells, is also extremely vulnerable. It's a rich role for any actor but to keep it from slipping into cliche or burlesque and then giving real depth can only be accomplished by the likes of Cagney.

How would White Heat be without Cagney. Gee, I don't know. How would baseball be without the ball?
Posted by Richard Hourula at 3:41 PM

The scene in the mess hall...I don't want to spoil it for others...but his reaction was completely improvised - and so brilliant that he actually scared the hell out of more than a few extras.

Fantastic film. Cagney was a genius at his craft.

I always thought White Heat was Cagney's best....I've seen all the movies more than once and this is the epiney of James Cagney