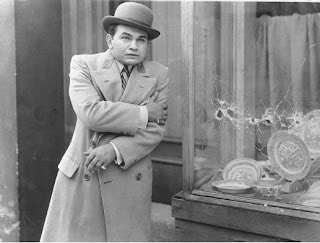 Most discussions of America's greatest actors leave out a man I'd put in the top five of all time cinema thespians.  If you've peaked at this post's title or the the above photo you know I'm talking about Edward G Robinson.

Robinson is most often remembered for two roles, as Rico in Little Caesar and Johnny Rocco in Key Largo.  Two films that bookended three decades of gangster roles for Robinson. But he also excelled being on the right side of the law, often successfully portraying the good guy. As you'll see from this list, which by no means encompasses all of Robinson's career, he could play all sorts in between. Here are my ten favorite Robinson performances, all in top drawer films.

1. Two Seconds (1932). Robinson is positively transcendent in this little seen film. He plays John Allen, something of an everyman whose life falls apart under the influence of a woman. Two Seconds is not available on DVD and has only been shown once on TCM in the past few years. Mervin LeRoy directed, Preston Foster co-starred.

2. Key Largo (1948). A signature role as the slimy gangster, Johnny Rocco. He's not just a crook, he's a vulgar one whispering goodness knows what into Lauren Bacall's ear. This is Robinson at his most despicable. John Huston directed, Bacall, Humphrey Bogart and Lionel Barrymore co star.

4. The Stranger (1946). Robinson as Mr. Wilson is tracking down Nazi war criminals in the aftermath of World War II. For more on the Stranger see this recent post. Orson Welles directed and co stars along with Loretta Young.

5. Sea Wolf (1941). Robinson is evil incarnate as an early 20th century ship captain. As Wolf Larsen, Robinson combines great intelligence and vulnerability with sadism. Though based on a Jack london story, Sea Wolf is often seen as an allegory for fascism with Larsen the tyrant. Michael Curtiz directed, John Garfield and Ida Lupino co star,

6. Scarlet Street (1945). A very different Robinson role as he plays a poor sap taken in by a femme fatale and her pimp. It is an utterly heart breaking and totally effective performance. Fritz Lang directed, Joan Bennett and John Duryea co star.

7. Five Star Final (1931). Robinson is Joseph Randall, the editor of big city scandal sheet in the midst of a circulation war. They'll gladly exploit someone's misery for a story. But Randall develops a conscience. It's a compelling story given its moral gravitas by Robinson's convincing transformation. Mervin LeRoy directed, Boris Karloff and Aline MacMahon costar.

8. Brother Orchid (1940). Robinson a gangster again but this time one who may see the light. He hides out in a monastery where he is exposed to a crowd that is the polar opposite of what's used to.  What effect will these self sacrificing men of God have on professional crook? Lloyd Bacon directed, Bogart, Ann Sothern and Donald Crisp co star.

9. Larceny Inc. (1942). Yes, Robinson could do comedies as he proves in this perfectly delightful film that was the basis of Woody Allen's Small Time Crooks (2000).  Robinson is J. Chalmers Maxwell, aka "Pressure." After being released from prison, Pressure buys a furniture store so that he can tunnel into the nearby bank for a big score. Bacon directed, Jane Wyman and Broderick Crawford co star

10. Little Caesar (1931). Robinson's breakthrough role as Rico is the classic gangster rise and fall tale. Rico is all bluster and ego, lacking any subtlety or self awareness. Robinson and others would play variations of Rico for many years to come. This is the original. LeRoy directed Douglas Fairbanks Jr. and Glenda Farrell co star.

I have tried to watch Brother Orchid several times, but I just can't get through it. It must be one of those films I am destined not to see.

Riku, a great post on a great actor and a man who in real life was by all accounts quite intelligent and personable. It's only in the last couple of years that I've come to realize what a great actor Robinson was, how many wonderful performances he gave, and how versatile he really was. He's often thought of as an actor of the 30s, but for me he reached his peak in the 40s. It's incredible that he never received a single Oscar nomination. You named all the best films, although I would add "The Whole Town's Talking" (1935), which has direction by John Ford (without cloying sentiment or cornball humor), the great Jean Arthur, and best of all Robinson in a dual role, playing a Rico-like gangster and his doppelganger, a meek soul like those in the Fritz Lang movies of the 40s.

I was looking forward to this wondering if "Two Seconds" would crack the list, I'm blown away that it's number one, awesome!

Also very happy to see The Sea Wolf and Larceny, Inc. make it, both favorites, but then again, so's the entire list.

Thanks for posting it, really enjoyed!

I agree with R.D - I love "The Whole Town's Talking" also.

Tom, I agree with RD too. I always manage to leave something off these kind of lists. Classic example is when I did my top Westerns and left off Red River. It's been awhile since I've seen The Whole Town's Talking" but that's no excuse.