Movies and Trains, As Natural as the Cream in Your Coffee 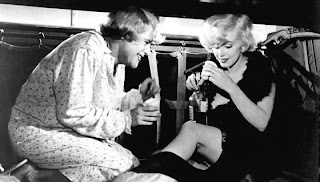 Trains and movies go together as naturally as jazz and saxophones. Directors are afforded a contained area which is at once limiting and liberating. Passageways are narrow and quarters confined and there's no terra firma. On the other hand there's movement, scenery, and challenges for the camera that can create memorable cinema. It's remarkable how many chase scenes successfully take place on trains, along with fist fights, love scenes and silly shenanigans.

Spacecraft, ships, aeroplanes and even submarines have provided moving set locations for films, but not with the degree either of frequency or success as have trains. Train travel was much more common in the United States up until the 1960s. Except for the Northeastern Seaboard, trains in the U.S. are infrequent, expensive and stop everywhere, making such travel tedious and impractical. It's a sad loss for Americans who as such strong individualists all want their own modes of transportation (i.e. cars) and can't abide their tax dollars subsiding a seemingly archaic mode of travel.

So aside from visiting or re-locating to Europe your best bet to enjoy riding the rails is to watch a movie.  There are literally oodles ("did he just write 'literally oodles'"?) of movies, most from the first half of the previous century, that feature lengthy or important scenes on choo choos. I can not even pretend that what I provide below is anything more than a sample. This list could easily be twice, three times, even four times longer. But I do think I've got a representative sample of excellent films where trains were integral to a good story.

The 39 Steps (1939) or Escape on a Train. Alfred Hitchcock frequently used trains and invariably to great effect. In The 39 Steps a man (Robert Donat) wrongly suspected of murder must elude the coppers while on board a moving a train. This first creates drama when a newspaper with his mug on it is purchased and then when the law gets wind he's on the train. A woman is of no help but a bridge is, in this delightful film full of derring do, dash and whimsy.

The Lady Vanishes (1938) or International Intrigue on a Train. Another Hitchcock film. This time there's a charming little old lady on a train and then there's not. Where'd she go and why does no one believe our heroine (Margaret Lockwood) who insists the woman was on board? It won't surprise you to know that there are the proverbial bad guys in this film, most of which is set on a train.  There's also eccentric English gents, romance, a handsome leading man (Michael Redgrave) and a shootout. Great fun in one one of Hitch's most under appreciated efforts.

The Train (1964) or World War II on a Train. In this film from director John Frankenheimer, trains co star with Burt Lancaster in a thriller about the French resistance trying to save rare works of arts from the clutches of the Nazis. The villains are trying to get the artwork out of Paris via -- take a guess ... who said train? Lancaster leaps about trestles, tracks and the trains themselves in his effort to thwart the bad guys. Action aplenty much of it on moving trains. Great stuff for WWII, train and film aficionados. (If you're all three you're in for a real treat.)

Twentieth Century (1934) or Theater on a Train. John Barrymore and Carole Lombard hamming it up and us viewers cracking up. This is great stuff. The film starts in a theater where Barrymore is an impresario and Lombard his discovery. But much of the action takes place aboard a train called the Twentieth Century, a few years later when Lombard is a big star and Barrymore's fortunes are on the wane. He's trying to woo her back with guile, a wing and prayer. Howard Hawks directed the twosome and let em have it. So you get two thespians feasting on the scenery, which remember, is a train.

Go West (1940) or The Marx Brothers on a Train. By rights this shouldn't be here as it's not a terribly good film, especially for the Marx Brothers. But it features one of the great trains scenes of all time. It is an elaborate chase sequence in which the train is veritably cannibalized to fuel itself. It is the embodiment of madcap antics and its on rails.

Shanghai Express (1932) or Scandal and Civil War on a Train. This folks is a great film and its long past high time it got its much due DVD release. Almost the whole shebang takes place aboard a train, namely the Shanghai Express. Marlene Dietrich stars as the notorious Shanghai Lil a well known, shall we say working woman, who's one of several intriguing passengers aboard the express. The journey will find itself right in the  middle of the Chinese Civil War. Joseph von Sternberg directed.

Wild Boys of the Road (1933) or The Depression on a Train. Riding the rails was a common form of transportation for the colorfully named hoboes of America's Great Depression. In this classic from William Wellman, it's teenagers searching for where the grass is greener. They hop a freight, meet compatriots and even get into a brawl with cops. Hoping a freight epitomized those desperate times when cars were abandoned and people searched the land for some sort of break. This movie captures that time as well as any other.

Palm Beach Story (1942) or The Ale and Quail Club on a Train. Folks, this is train abuse pure and simple. What the wealthy and intoxicated members of the hunting and imbibing club do to this train is a scandal. Their gunplay (harmless in intent) terrorizes a porter and provides unwanted air conditioning to a club car. Meanwhile they go on a hunt for a young lady they've taken under their wing, utilizing their beagles. That young lady (Claudette Colbert) not surprsingly hides from her besotted benefactors and in the process meets a very wealthy bachelor (Rudy Vallee). You get it, it's more madcap fare from director Preston Sturges and is howling good fun.

Schindler's List (1993) or The Holocaust on a Train. I never said this was going to be all yucks and giggles. There is a tragic iconography in the trains pulling into Auschwitz with their doomed cargo. Stuff to haunt your dreams (its done mine) for its grim reality. Schindler's List evokes that horror and particularly the horribly crowded cattle cars.

Some Like it Hot (1959) or Men in Drag on a Train. What could be better than sharing intimate quarters on a train with Marylin Monroe? Not much although watching her cavort with Jack Lemmon and Tony Curtis, with the latter two in drag, comes pretty close. This classic comedy's key middle third takes place aboard a Miami bound train. The three stars were never better.

Butch Cassidy and the Sundance Kid (1969) or Bandits on a Train. Behold the dedicated bank employee who stands steadfast aside his company's safe refusing to yield to the Hole in the Wall Gang. No, he'll not let them near the loot though they threaten to blow it and him to kingdom come. Our persistent thieves are led by Butch (Paul Newman) and Sundance (Robert Redford). Imagine their surprise when too much dynamite is used and money blows hither and yon. And imagine their shock when out of some of the trains cars come armed horseman. The law! The chase is on and birthed by a train.

Strangers on a Train (1951) or A Train With Strangers On It. There's actually not a lot of this film (another from Hitchcock) set aboard a train but what there is is crucial. Strangers opens with the chance meeting of two men who strike up what is to one of them a most interesting conversation (to the other it all seems rather macarbe and odd). Our oddball suggests that they each commit a murder on behalf of the other. Each will have an air tight alibi and thus neither will be suspected. The train and most especially the tracks, provide some key symbolism as well as a starting point.
Posted by Richard Hourula at 6:27 PM

hmm, "literally oodles"? Unfortunately, that very much sounds like something I would say.

Sending this post to my brother who is obsessed with trains... I'm sure now he'll request to borrow each of these films from my collection.

Good list, Richard. I'd add From Russia with Love, North by Northwest, The Bridge on the River Kwai, Silver Streak, and Von Ryan's Express with a special nod to Keaton's The General.

Good suggestions. I thought of all those except Von Ryan's Express. Must have lost my "train" of thought.