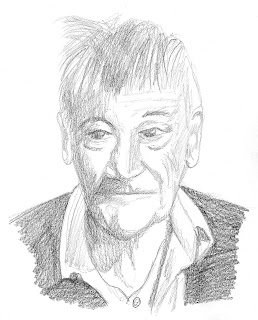 (Drawing courtesy of Kate Gabrielle proprietor of the wonderful blog, Silents and Talkies.)

He was a coot, he was codger, he was a geezer, he was a curmudgeon, he was an old fogy, he was a lovable ole grandpa. He was Charley Grapewin, who delighted film audiences for an all too brief 22 years, 1929-1951.

Check out some of the films his craggy old face graced: Heroes for Sale, Midnight Mary, and Wild Boys of the Road from 1933. Alice Adams in 1935. Petrified Forest, Small Town Girl and Libeled Lady in 1936. The Good Earth and Captain Courageous in 1937. The Wizard of Oz and Sabotage in 1939. The Grapes of Wrath in 1940.

Grapewin was already 60 years old when he made his screen debut so playing the resident old timer came naturally to him. Despite all appearances, he was not born old. In fact his early show business career was as a trapeze artist and aerialist. He then trod the boards as a thespian (stage actor to you, bub). And popped into a few very early films at the turn of the century.

In his first few roles of note, Grapewin was a kindly figure, particularly in Heroes for Sale where he was an innkeeper and later ran a soup kitchen. In Midnight Mary he was the court clerk who listened to Loretta Young's story in flashback as she awaited a verdict on charges of murder.

One of Grapewin's better roles was as Bette Davis' grandpa in Petrified Forest. Outwardly a cheerleader for outlaws and the supposed survivor of an encounter with Billy the Kid, Leslie Howard takes him to task for being a selfish old skinflint. There is indeed a darkness to his Gramp Maple.

The Wizard of Oz , in which he was Uncle Henry, certainly brought Grapewin his greatest notoriety. But in fact it was somewhat limited role in which he played a very distant second fiddle to Auntie Em. But besides Petrified Forest it may have been The Grapes of Wrath that was his best role. He was just plain old Grandpa. Stubborn, lovable, the ultimate aging grandparent. The  Joads had to get him soused before they could pack him on the truck with the rest of the clan to journey west.

Did Charley Grapwein have great range as an actor? Really that's kind of a silly question. If your career starts in the seventh decade of your life you're not going to get to play the romantic lead, and probably not any kind of lead, for that matter. Grapewin was not so much stuck in the role of the grandfather as he came to embody it. The man was good at what he did. Sometimes he was a grump, other times a jolly ole cuss. Sometimes a quiet contemplative soul, other times a chuckling, silly old gaffer, but Grapewin enhanced everything he was in. He had the huge advantage many actors do: a distinctive voice and an interesting face. And he never tried to do too much, Charley Grapewin was never a buffoon, just colorful.

Posted by Richard Hourula at 9:27 PM

Perfect post! I love him in Midnight Mary, that may be my favorite. I can't believe he was a trapeze artist! Now there's a story for the dinner table tonight :D

Thanks again for letting me do the art- he was one of my favorite faces to draw, ever!