The Poetry of Antonioni 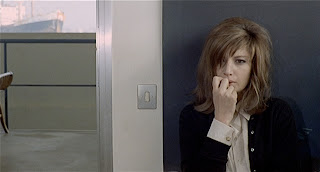 “They were still in the happier stage of love. They were full of brave illusions about each other, tremendous illusions, so that the communion of self with self seemed to be on a plane where no other human relations mattered. They both seemed to have arrived there with an extraordinary innocence as though a series of pure accidents had driven them together, so many accidents that at last they were forced to conclude that they were for each other. They had arrived with clean hands, or so it seemed, after no traffic with the merely curious and clandestine.”
― F. Scott Fitzgerald, Tender Is the Night

I'm reading Tender is the Night again. I never remember much about the plot after reading it and even while reading it I'll forget just exactly what's going on, who's who and where they are. I get lost, a lot, in Fitzgerald's worlds. I drown in the elegance and often must pause. Pause for what? I don't know. Trip, I guess. I'm on words, not acid. yeah, weird, but there I am.

So it is with films. Stories, plots, even some of the ideas and themes are just the window dressing of the moods and feelings created. Like the lyrics to songs you enjoy. The words can be cool, even meaningful. But the rhythm....

Michelangelo Antonioni is a director who understood the lyrical quality of films as well as anyone. In addition to such masterpieces as L'Eclisse (1962) and Red Desert (1964), he wrote a cinematic poem with his first film, which was of all things a noir, Story of a Love Affair (1950). As an Italian film it didn't suffer from what confined American Noir of the same period -- pre-destiny. The film could thus resolve itself of its own volition and without prescription from a prefabricated moral structure.

Story of a Love Affair was a preview of the visual masterpieces that Antonioni would later direct. It also features the type of morally ambiguous characters that would populate his later films. Without the distraction of a protagonist to root for, viewers can focus on mood, setting and where and how the camera trains its eye. Lovely. 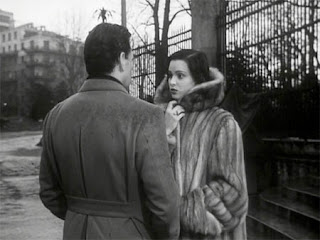 It's always a plus that, while decadent or  banal, his characters are physically appealing. See Monica Vitti, Alain Delon, Jeanne Moreau, Marcello Mastroianni and in Story of a Love Affair, Lucia Bose and Massimo Girotti. They are, you see, an integral part of the scenery, taking up, as they do, so much screen time. By the end of L'Eclisse, Antonioni discarded them entirely. Vitti and Delon had served their purpose and the story could carry on without their presence. Dialogue? Please.

I love the snappy dialogue of certain films. The back and forth of characters. the deep thoughts, the verbal sparring, the philosophizing, ruminating and speechifying. I've dedicated many a post on this blog to my fondness for film quotes. But I love that some directors, like Antonioni, can dispense with chatter and tell a story through pictures. Things that are worth, the saying goes, a hundred words time ten. Sometimes endless chatter is the easy way out in story telling. Hell, Chaplin didn't need a lot of...words. Move your narrative through the flow of pictures, that's the thing.

There is so much talking today. Radios, TVs, even the Internet are blasting us with rapid fire verbiage. It is sensory overload and condemns us to drowning by minutiae. Often those words are accompanied by car crashes, gunfire, explosions and soaring superheroes. The 12 year old in us delights. The mind reels. Many suckle at the simple happiness of mind numbing stimuli. To each....

There is so much beauty in the world. So soft and gentle. So tempered by the angels that flit about our souls. We dance among the songs of our hearts and find joy in the visions of artists. Those who gave us light in dark moods.


Posted by Richard Hourula at 8:31 PM