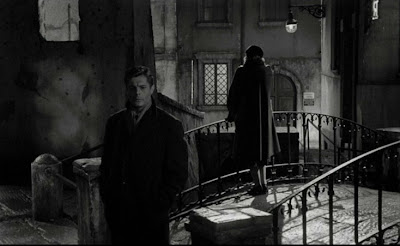 The wife hit me with the news this morning. Delivered it quite matter of factly. She thinks Marcello Mastroianni, in his prime, was better looking than me. Somehow she figured it would soften the blow if she admitted that Marlyin Monroe in her prime was prettier than she. It didn't.
This came up because we had watched Le notti bianche (1957) last which night starred the aforementioned Mr. Mastroianni. He was 33 years old at the time and I've got to admit he was no pock marked beast. He was the rare kind of guy that even vain, shallow, emotionally vulnerable men like me admit is handsome. (Wait a second, should I be using past-tense here? After all, the man is dead these 13 years, but then again this discussion relates to what he looked like while very much alive and not yet in middle age. This is particularly vexing because I'm just about to finish the most difficult course I've ever taken: Grammar Fundamentals for ESL Teachers, and it has made me conscience of every clause, phrase, preposition and modal I use or don't use. Sorry for the digression. I'll heretofore go with present tense).
So yeah, Mastroianni is a good looking chap and perhaps never more so than in this film. His opposite here is Maria Schell who is easy on the eyes too. But I must say that she can't hold a candle to other Mastroianni co stars like Claudia Cardinale, Sophia Loren or Anita Ekberg. Okay she can hold the candle all she likes but she ain't as purty as them are dames (who is?).
Why this obsession with looks? Because Le notti bianche (that translates in English to, the white night) is all about looks. The story is interesting, equalling the better film romances, but its the look of the film that is so utterly captivating. It is one of the many, many great arguments in favor of black and white movies. Indeed Mr. Fancy Pants Mastroianni prob'ly looked so good in large part because of the lack of color. That's no slight against the man, actors and actresses all look better sans the colors of the rainbow. The simple reason is that black and white does not reveal the acne that no doubt actually riddled Mastoianni's face, nor the hideous scars like the one that ran across his visage.
But seriously folks....
For cinematic beauty, black and white is unbeatable. In Le notti it's not just the faces that benefit, but the streets of Rome, especially the ones in the neighborhood where most of the story is set. In several scenes those streets are wet from rain, always a good look in black and white. For the film's heart wrenching closing scene, snow falls (hence the white night). It doesn't look cold, just gorgeous. All the exteriors were shot at night, and most of the interiors for that matter, adding to the romantic tone of the picture.
The story is: lonely man meets lonely woman and for the man its love at first sight. She's carrying a torch for another complicating the gent's efforts to win her over. He's persistent. She's moody. They dance (literally and figuratively). They laugh. He gives up. He tries again. She pulls away, gives in to him. So it goes until the melodramatic conclusion. In the hands of a hack it would be pure baloney but the director was Luchino Visconti and so its no surprise that you end up believing every word and action. Even if you're an old grump like me.
I've said this before about films and it's especially true with Le notti, you could watch it without the sound and love it to death. It's not just the people and the scenery, it's the way the story moves or stands still. Like the very best directors, Visconti knows when to hold a shot for a few beats longer than most directors would. Part of the magic of the film, one of the ways you access the romance, comes from being allowed to linger for a second or two with a character or setting or a character in a setting. There's no rush. When there is action its smooth. Neither stylized nor perfectly realistic, just, comfortable, sometimes pretty, to watch.
Mastroianni and Schell do more than just look good. They make the story work because they don't act, they are there. They are comfortable to watch in a way so many present day actors aren't. They do more with their eyes than a lot of hams do with all their verbosity and gesticulation.
I really liked this film because I liked looking at it. The story was somewhat pedestrian, but the delivery was molto bello.
But I tell ya what folks, you think Mastroianni was good looking, you should get a load of my mug.
Posted by Richard Hourula at 9:26 PM

This is so odd, I decided this morning that I was going to watch every single Marcello Mastroianni film on Netflix, added them all to my queue and prepared myself to watch 8 1/2 on instant watch tonight! I'm seriously about 20 minutes away from watching it now, and I see your post show up in my blogger dashboard!

The stars are aligned for me to have a Marcello Marathon!

I wish this one was on instant watch, it seems so good! I guess I'll just have to wait for the disc to arrive in the mail before I can admire his good looks .... Oh, and enjoy the great story, plot, scenery...... etc ;-D